Lightscape is coming to Kings Park in 2023

For the very first time Lightscape is coming to Perth!

This internationally acclaimed sensation of light, colour and sound will be using the beautiful gardens of Kings Park as a canvas. Fraseri honours Charles Fitzgerald Fraser (1883 - 1951), who was a Western Australian surveyor and pastoralist.

This cycad is endemic to Western Australia and can be found as far north as the Geraldton Sandplains, to the southern contingent of the Swan Coastal Plain.

With a show of spectacularly structured fronds that can grow up to three metres long, at the right time of year, you may also be able to spot large conical fruit, with the bright red colour of the seeds contrasting against the evergreen habit of Macrozamia fraseri.

This plant is slow growing and the trunk of older plants can be up to one metre high, but are more often trunkless. Often these plants bear the blackened marks of a fire on their trunks – a testament to their hardy nature.

This species produces separate gendered plants with the female plant producing the large toxic red fruits. The Tranes genus of Weevil plays an instrumental part in the spore transfer between male and female cones. Once fertilised, the female cone produces vibrant red seeds which are poisonous, as Dutch explorers found to their cost when they first set foot on Perth soil in 1697.

Ancestors of the cycad existed 250 million years ago. It's tough sharply pointed and leathery fronds protected the plant from grazing dinosaurs.

Visit Kings Park to see throughout the Kings Park Botanic Garden, Kings Park Bushland, and at Zamia Café, which is named after this very plant (refer to map). 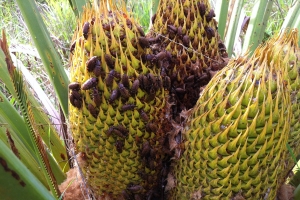