The Botanic Terraces and Botanic Pavilion have opened in Kings Park, to celebrate the 50th anniversary of the WA Botanic Garden. 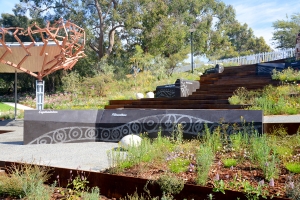 Local artists Anne Neil, Steve Tepper and Richard Walley worked with landscape architects Plan E on the design. Striking garden beds feature plants of the Mulga and Mallee regions and have been created by the Kings Park horticulture team.

The design is inspired by Western Australian plant life and its impact on people across history - from botanists and horticulturists to artists and Aboriginal people.

The Botanic Terraces and Botanic Pavilion enjoy a prime location overlooking Mount Eliza, treetops and the river - not far from the Giant Boab tree.

Minister Jacob said the Botanic Terraces and Botanic Pavilion were a fitting way to celebrate the 50th anniversary of the Western Australian Botanic Garden.

'This is a wonderful way to acknowledge our precious native flora, and also a magnificent new space for the whole community to share and enjoy,' he said.

'I congratulate the Friends of Kings Park for leading this project on behalf of the community and achieving such an outstanding design result.

This pavilion and the terraces enhance what is already one of the most exceptional botanic gardens in the world - in both standards of presentation, numbers of visitors and in its contribution to scientific knowledge.

The Botanic Garden is a leader in environmental conservation, horticulture and scientific research. Its plant collection displays are among the best in the world.'

The Botanic Garden also encompasses elements of the State's cultural heritage, and is a venue for live music, theatre, education programs and the annual Kings Park Festival.

This project is an initiative of the Friends of Kings Park in partnership with the Botanic Gardens and Parks Authority, supported by Lotterywest. The much-loved Kings Park DNA Tower has reopened to the public after undergoing its first full refurbishment in 50 years.