Their Royal Highnesses, The Prince of Wales and Duchess of Cornwall, enjoyed a warm welcome and an insight into Australia's most exceptional park in Kings Park and Botanic Garden on Sunday 15 November 2015 - the last stop in their Australian visit. 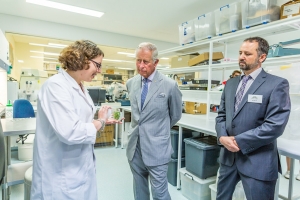 The Prince of Wales, who is known for his interest in plant conservation, took a private tour of the Kings Park science laboratories and nursery.

Dr Miller said The Prince praised the practical nature of research in Kings Park, which is offering up real-world solutions to conservation and environmental issues.

'I was delighted The Prince was so interested in meeting our post-graduate students to learn about their research', he said.

'His knowledge and personal passion were clearly evident and he really brought out the students' enthusiasm and commitment to their work.'

The Prince was particularly interested to know more about research into seed technology, tissue culture, and the impacts of bushfire, drought and climatic change on plant survival.

PhD student Susan Whitely said The Prince was interested in the conservation of rare and threatened flora using tissue culture and cryopreservation in liquid nitrogen.

His Royal Highness seemed particularly intrigued that we are able to store small segments of plants indefinitely, before returning them to their natural environment', said Susan.

Ryan Tangney, another PhD student, provided a 'cooking class' of sorts - demonstrating his research into the ability of various seeds to withstand high temperatures in bushfire situations using ovens to test the results.

Ryan explained to The Prince how seed survival can be estimated during controlled burns and discussed his research into what traits seeds have that make them fire resistant.

'We all agreed the response of Australian plants to bushfires is remarkable', said Ryan.

Anthea Challis, a research assistant who intends to commence her PhD in the near future, discussed her work on the decline in numbers of Banksias on the Swan Coastal Plain.

'When I explained that significant declines in rainfall in the Perth region are a likely cause of these tree deaths, His Royal Highness showed particular interest in the topic of climate change', said Anthea.

After viewing the Park's nursery and seed storage facilities, The Prince of Wales then joined the Duchess of Cornwall for a walk through the Western Australian Botanic Garden guided by Senior Curator Grady Brand and Director of Horticulture and Conservation Lesley Hammersley. They started their tour at the mighty 'Gija Jumulu' Boab Tree, where they presented the Duchess with a bouquet of WA wildflowers hand-picked in Kings Park.

They then ventured to the new Botanic Terraces and Botanic Pavilion, which was recently opened to celebrate the 50th anniversary of the WA Botanic Garden. Noongar man Olman Walley performed didgeridoo music and presented two of his own handcrafted boomerangs.

The Prince and The Duchess finally greeted well-wishers before pausing at the Flame of Remembrance and State War Memorial. 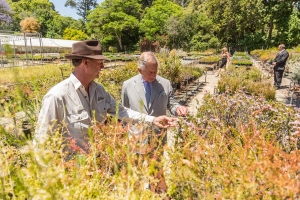