Alan Barrett commenced as Executive Director of the BGPA on 23 July 2018. Alan has spent most of his life within a stone's throw of Kings Park. 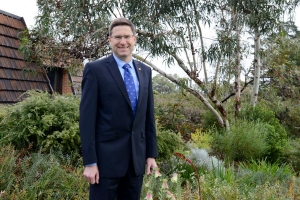 He has ridden thousands of laps around Bold Park's perimeter and through Kings Park thanks to a long-held obsession with cycling.

Now, Alan's days of viewing these two iconic Perth parks from their edges are over, as he finds himself right at their epicentre as the Botanic Gardens and Parks Authority's new executive director.

In his first week based in Kings Park, Alan says he is fascinated by the people that make Kings Park and Bold Park tick.

'The professionalism and enthusiasm I see in everyone I meet here is second to none, which has been a fabulous first impression', says Alan. 'The deep commitment of staff and volunteers is phenomenal.'

Alan Barrett, 52, comes to the BGPA from the Public Sector Commission, a central WA government agency that sets human resource management standards and ethical codes and provides leadership in governance effectiveness and integrity.

At the PSC, Alan held directorships in various operational areas over about eight years. Prior to that, his early career involved eight years as a teacher and curriculum-writer and then policy and corporate governance positions in the culture and the arts portfolio, including the Department, the Art Gallery of WA, the WA Museum and, for a brief period, at Screenwest. Alan also has masters degrees in both Business Administration and Public Administration.

These roles have given Alan an appreciation of the skill and passion of curators, technicians and creative people across these major WA institutions and for the significant contribution that volunteers make to institutions, public programs and collections.

'I enjoyed being close to the activity of those organisations and working with both technical and creative people that engage directly with the community in a variety of ways. These are impressive and interesting people to be around', explains Alan.

With significant experience in past and current government amalgamation processes, Alan hopes he can help enhance Kings Park's many productive partnerships, particularly within the newly formed Department of Biodiversity, Conservation and Attractions.

He says he is fascinated by the commitment to science that sits behind every activity in Kings Park.

Alan uses Kings Park Science's success in restoration ecology projects as an example of the BGPA's success in making an impact that extends far beyond the boundaries of Kings Park itself through partnerships with industry, universities and other organisations.

While working at the Public Sector Commission in 2017, Alan assisted with the changes in government to amalgamate Parks and Wildlife, BGPA and other statutory authorities into the Department of Biodiversity, Conservation and Attractions. His previous experience in the arts portfolio had given Alan a good an understanding of the issues and institutions involved.

'Then, as I met all the executive groups of the agencies joining the Department, I realised just what fantastic people they were. I was interested in the unifying values of conservation and environmental sustainability shared by each of them. I also liked that education was a strong element in each institution.

'I got a particular sense of the incredible diversity of the programs here in Kings Park and that this is an organisation that punches far above its weight with the resources it has to work with.

'Ultimately, I was attracted to the people and what the organisation is all about. When the opportunity came up, it was not a hard choice to put my hat in the ring.'