Western Australian quendas (Isoodon fusciventer) aren’t just cute and quirky, their digging and fossicking habits have been found to make an incredible difference in the growth of plants, according to new research. 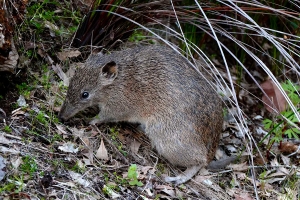 A recent study by a Kings Park Science researcher, Dr Katinka Ruthrof, in collaboration with Dr Leonie Valentine and Prof Richard Hobbs from the University of Western Australia, has found the diggings of the quenda (also known as the bandicoot) alters soil nutrients and microbial activity, creating more productive conditions for seedling growth.

After collecting the soil from 20 of the small marsupials’ foraging pits, 20 associated spoil heaps and 20 from undisturbed soil, the team measured the height and maximum growth of Tuart seedlings over a four-month period. They found the soil from spoil heaps dug by quendas had the highest levels of potassium and electrical conductivity, leading to taller, heavier and thicker stems of the seedlings.

The better conditions for seedlings to grow are believed to be caused by quendas’ digging, which encourages leaf litter decomposition in the soil that provides extra nutrients for seedling growth.

This breakthrough comes at a time where sightings and recordings of quendas in Kings Park has risen dramatically, with unpreceded numbers now believed to be living in the park. It is thought the decline in quenda numbers in the past was due to the emergence of both feral and domestic animals and the urbanisation of Perth, which led to an increase in deaths and loss of habitat.

Sadly, quendas are still threatened, with many populations still in decline. The findings of this new research indicate the threats to quendas will have a knock-on effect on the health of local ecosystems, making it vital we continue to conserve and protect the quirky quenda.

How can you help? Go on a ‘quenda quest’ and let us know if you see one in Kings Park by emailing This email address is being protected from spambots. You need JavaScript enabled to view it. or calling us on +61 8 9480 3600. Information including the location and approximate time of your sighting will come in handy. Remember, quendas aren’t familiar with humans the same way quokkas are. They are naturally cautious of humans and you shouldn’t attempt to touch or pick up a quenda.