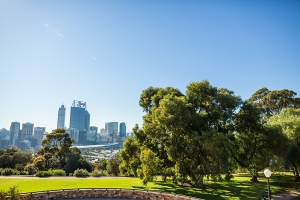 More than 1,200 guests from around the globe experienced an evening under majestic gum trees in the spectacular Western Australian Botanic Garden during the Australian Tourism Exchange (ATE), while taking in Kings Park’s famous views of Perth and the Swan River.

Kings Park is home to one of the few botanic gardens in the world to boast such a prime inner-city position and views, attracting more than five million visitors each year.

A special pop-up venue created by Tourism WA for the WA Showcase provided a 'the bush in the city' experience for delegates. The ambitious project used one of the most beautiful sections of the WA Botanic Garden as a major event venue for the first time. Roe Gardens is home to unusual plants and trees from WA regions such as Shark Bay and the Wheatbelt, including the world’s largest gum blossoms (Eucalyptus macrocarpa, common name: Mottlecah).

According to the Park’s executive director, Kings Park was the perfect place to give ATE visitors a taste of the State in one location.