More than 4,500 survey respondents rated the park an average 4.7 out of 5 stars as a Perth visitor attraction.

A desire for biodiversity conservation leadership in line with remaining a safe and welcoming place for people of all ages and abilities ranked as top priorities by the community for Kings Park. Many people placed a high value on green spaces like Kings Park for encouraging good physical and mental health for the people of Perth.

'Understandably, there is an expectation that Kings Park will continue to provide high quality open spaces and amenities for recreation, play and community activities’, said Executive Director Alan Barrett.

When asked to prioritise Kings Park’s most important roles, survey respondents ranked the top five in the following order:

Protecting its own native bushland was regarded as the most important priority for Kings Park in the next five years, with 87% rating it as very important. Many survey respondents also regard Kings Park’s role in plant conservation (86%) and research (76%) as very important.

'Many people are looking for credible, locally relevant information on how to take action for the environment and improve their understanding of local biodiversity issues and environmental sustainability', said Mr Barrett.

Many suggestions to adopt new technology such as visitor apps were received, along with suggestions to introduce new types of eco-friendly transport to get visitors around the park with less reliance on private vehicles.

Ongoing efforts to promote Whadjuk Noongar connections to Kings Park were also supported, as well as being ‘open for business’ for relevant commercial operators.

Community views about developing new attractions and venues were more divided, with around 38% of survey respondents supporting the construction of new attractions, 34% opposing the idea and a further 28% undecided or neutral.

The results of the community survey have been analysed and calibrated by an independent statistician to ensure demographic groups and perspectives in the WA community are accurately represented.

In addition, specific analysis on the raw data was undertaken about community sentiment towards a cable car, which is known to be a polarised issue in the community.  The analysis revealed that overall sentiment was strongly against the concept of a cable car.

The survey was undertaken to inform the development of the new Kings Park and Botanic Garden Management Plan.

The draft Kings Park and Botanic Garden Management Plan 2021 – 2025 was published and open for public comment on 15 September 2020. Public submissions closed on 16 November 2020.

The Minister for the Environment approved the Kings Park and Botanic Garden Management Plan 2021 – 2026 in May 2021. 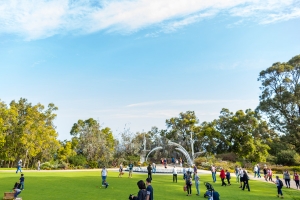