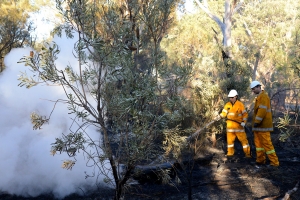 Our scientists are working to assess the best methods of managing bushfire risk and conserving the natural environment on the Swan Coastal Plain.

As part of this research, a controlled fire is planned to take place in Kings Park on one day between late April and mid May 2021. The exact date will be dependent on all required weather and other safety conditions being met.

This will be a carefully managed fire, of low intensity and low flame height, applied to a three-hectare site in the park. Mature trees in the chosen site will be subject to mild scorching only. Animal habitat will be monitored as part of the scientific research.

Controlled fires were successfully undertaken in Kings Park in May 2015 and Bold Park in April 2016 as part of this project. Since these fires, BGPA scientists have been tracking changes in the ecosystem as a result of the fire and subsequent management treatments.

Surveys looking at the re-emergence of seedlings, re-sprouting of affected plants and weed prevalence have begun. Other indicators such as soil moisture and the structure of plants and tree canopies are also being surveyed seasonally. Weed management in early winter is underway in three of the six experimental blocks.

To learn more about the upcoming controlled burn please review the flyer below or contact us during business hours with any enquiries.

The Premier of Western Australia has announced that restrictions will ease in Perth and Peel from 12.01 am, Saturday 8 May until 12.01 am, Saturday 15 May, subject to no further outbreaks. As the situation evolves, the BGPA will continue to provide updates and make operational changes as needed.

A section of the Bridle Trail in Bold Park will be closed from the 12 May to 17 May 2021 due to maintenance works.

Construction of a new pavilion and small stage at Kings Park and Botanic Garden’s Exhibition Lawn will begin next month.