Art, science and culture are all coming together in a beautiful series of seagrass-inspired artworks, on display from 3 - 9 December at Aspects Gallery Shop in Kings Park. 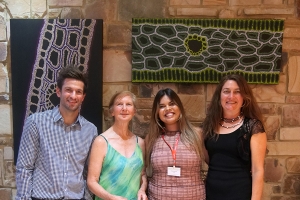 The artworks by Tiahna Oxenham, Sabrina Dowling Giudici, Nadja Roelofs, and Kelly Osborne are all inspired by marine environments, featuring seagrasses and seaweeds as well as the native animal species which rely on them.

Artist Tiahna Oxenham, collaborated with scientists from Kings Park and the University of Western Australia to create her artworks. Tiahna is an environmental science student with Malgana, Nyul Nyul and Yawuru heritage. Her work was inspired by the cellular structures of seagrass leaves viewed under a high-resolution microscope.

'I have a passion for knowledge of everything related to plants, right down to their cells. This passion is transferred to my art, with each piece incorporating both western and Indigenous knowledge to reflect how I see the world,' Tiahna said.

Tiahna’s artwork celebrates the anatomical features of a wire weed seagrass (Amphibolis antarctica), including the outer wall of epidermal cells (which protect the leaf from the outside world) and thin-walled mesophyll cells which surround the air-lacunae (spaces for oxygen to pass through). The centre of the artwork shows the tightly arranged bundle sheath cells, which hold the plant’s vascular tissues (transport systems for life-sustaining nutrients).

Dr Elizabeth Sinclair, a scientist from the University of Western Australia and Kings Park Science, said that the combination of art, science and culture created a beautiful showcase for the importance of seagrass meadows, the ‘unsung heroes of our coastlines’.

'Seagrasses play a really important role in ecosystems: they stabilise shifting sands, capture carbon, and support an incredible array of marine life. Unfortunately, we’ve had widespread losses of seagrass globally, including locally within Cockburn Sound and in Shark Bay. It’s so important that we continue working to restore seagrass ecosystems and celebrate their importance through science-arts collaborations like this.'

Visit Aspects Gallery Shop to see the exhibit from now until 9 December 2021.

Road closures and service interruptions will occur in Kings Park and Bold Park on Wednesday 26 January 2022.

The Premier of Western Australia has announced mask-wearing in public indoor venues and on public transport will be mandatory in Perth and Peel from 6.00pm Sunday 16 January.

As the COVID-19 situation in WA evolves, the BGPA will continue to provide updates and make operational changes as needed.

The support of hundreds of dedicated volunteers was celebrated this week at a Volunteer Appreciation Function at Zamia Café.