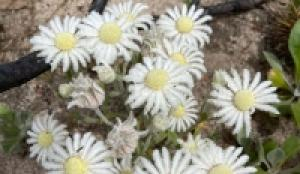 But amidst the hardship and struggles of recovery, Murray has found a light in the incredible emergence of a flower blooming on his property for the first time in an estimated 70 years - Actinotus superbus. This species only emerges in the wake of a fire, and the absence of a fire in the region for more than half a century indicates that the seeds of this species are incredibly long-lived - a natural wonder. He invited the Kings Park horticulture team to his property to capture this unique moment for future generations.

“The thing that gives you hope, apart from the people, is to see how strong nature is, what it does, and the likes of this Flannel flower. This would only be here because of the fire, and I take a lot of solace in the fact that this is something good that came from it.”

Actinotus superbus is a highly ornamental flowering annual within the genus containing the ‘Flannel flowers’.  Flannel flowers are named after their woolly, velvety appearance and feel. While not considered threatened, they are not often seen unless specific conditions are met such as fire and smoke, followed by rainfall.

This particular Actinotus is not currently captured in the Kings Park seed collection and was particularly unique for its fluffy bracts and large flowers.

The Kings Park team installed mesh seed bags over selected parts or whole flowering plants. The seed is estimated to be fully matured in 4 – 6 weeks, after which the seed bags will be retrieved. The bulk of the seed will form part of a longer-term collection in the seedbank, but also be used to grow plants in the nursery, from which further seed can be harvested to generate plants for use within the Kings Park display gardens.

Murray said this particular patch was like nothing he had seen in his lifetime. “This fire has given me a big picture of the whole turn-over of the natural environment. Nobody wants this, but I’ve tried to find some of the smaller things that make you feel good.”