Crotalaria – (Greek) from crotalon – rattle, castanet – referring to the way the seeds rattle in the pod when shaken.

Crotalaria cunninghamii is a short-lived, upright shrub that is widely distributed throughout the northern half of Western Australia, from the coast through to the deserts, predominantly on drainage lines and sand dunes.

This species grows up to four metres high with large oval-shaped, velvety grey-green leaves and branches. But its most fascinating feature is its mass of large, vivid green pea flowers that are finely striped with purplish-brown 'veins'. Flowers are displayed in terminal clusters, with each individual closely resembling a bird that is attached by its 'beak' (the calyx) to the stem, hence its common name.

The green bird flower generally blooms from January to April in Perth or longer in its natural habitat, followed by velvety, club-shaped seed pods about four to five cm in length.

C. cunninghamii is a bird-attracting plant ideal for low screening and borders.

Visit Kings Park and Botanic Garden to see Crotalaria cunninghamii in the Kimberley garden beds near the Two Rivers lookout and boab trees (refer to map). 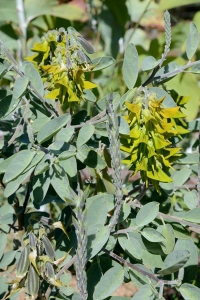