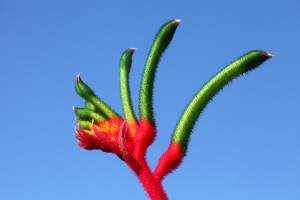 Anigozanthos - (Greek) origin uncertain, but the three possibilities are anisos = unequal (alluding to the corolla), anichos = elevated (as hands in prayer), or anoigo = to open or undo (alluding to the open branching of the flower stems) + anthos = flower.

manglesii - in honour of Robert Mangles (d. 1860), 19th century horticultural enthusiast, who raised the type specimen from seed in his English garden.

As Western Australia’s iconic floral emblem, Anigozanthos manglesii needs little introduction. The Red and Green Kangaroo Paw is a perennial herb with strappy mid-green leaves extending from a central point at the base. It is restricted mainly to the coastal plains, from Shark Bay in the north, extending south to Cape Leeuwin, and further inland in south-west WA where it grows in sandy soils in open forests and heaths.

Typically, red and green velvety flowers at the end of tall stalks (up to 120 centimetres) appear from August to November. However, colour variations are fairly common amongst this species, with plants presenting green/yellow, and combinations of pink, orange and green flowers (called 'sports') often found among populations. Anigozanthos manglesii is also known to hybridise naturally with other species of Anigozanthos.

Growing Kangaroo Paws in your garden will attract many nectar-loving birds including honeyeaters and wattle birds. The sturdy stems of the flowers are able to support the weight of the birds while they cling to them and feed from the flowers.

Did you know that Anigozanthos manglesii is one of the three plants incorporated into the Botanic Gardens and Parks Authority logo? It is also the Kangaroo Paw represented in the marble mosaic artwork, created by artists Rudolph Verschoor and Jacqueline Pinnock, forming part of the entry statement to the Western Australian Botanic Garden. 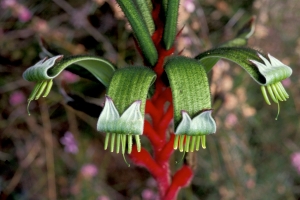