Atriplex – (Latin) name for the garden herb orach, which can be used like spinach.

nummularia – (Latin) from numus – a silver coin, referring to the round, silvery or grey leaves.

Atriplex nummularia is the largest of the Australian saltbushes, growing approximately one-three metres in height and two-four metres wide. Found naturally in the central and southern arid regions of Western Australia from the Avon Wheatbelt to the Nullabor in clay or sandy loam.

Atriplex nummularia can be used as an ornamental garden plant, or for planting in informal hedges or windbreaks, providing an appealing silvery contrast against darker plants in the garden. It is also useful for roadside plantings as the foliage is readily visible at night when lit by headlights.

Visit Kings Park and Botanic Garden to see Atriplex nummularia in the desert beds at the entry to the Western Australian Botanic Garden. 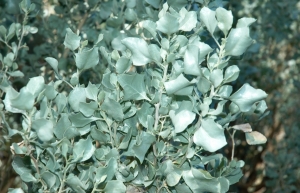