Banksia pilostylis is endemic to WA, found naturally occurring in areas south of the state near the town of Esperance. It grows well in white or grey/yellow sand or sandy loam soil and is commonly found in sandplains, often growing in swampy depressions.

It is a dense and compact shrub, growing from 2-4 m in both height and width. The leaves are long, saw-toothed and have a silvery underside. Banksia pilostylis blooms from October to January with a showy display of strongly scented cream to yellow flowers. This shrub produces large amounts of nectar from its spike shaped cylindrical flowers and because of this, it is a perfect addition to a garden if you hope to attract honeyeaters and other small nectar loving creatures. 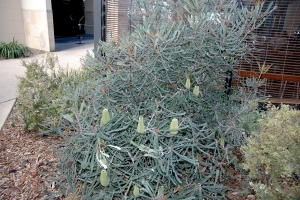