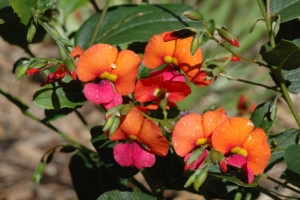 Chorizema: (Greek) from chorizo – to divide, and nema – thread; referring to the stamens that are separate.

cordatum: (Latin) from cordis – heart, referring to the heart-shaped leaves.

Chorizema cordatum, is a small, erect or scrambling WA native shrub that grows up to one metre high and 1.5 metres wide. It occurs naturally in the forests of the south-west on gravelly or loamy soils and is found more commonly in wetter areas; near rocky outcrops, on hills, along watercourses and in winter-wet flats.

As the name suggests, the elongated leaves of C. cordatum are often heart shaped, with slightly undulate margins. However, its most striking feature is its profuse racemes of large pea flowers of hot pink, orange and yellow that when in full bloom transform the plant to a brightly coloured mass of flowers. These flowers may appear anytime from July onwards into late spring, but the main flowering is in the early months of spring.

Like many species belonging to the pea family Fabaceae, C. cordatum is able to 'fix' nitrogen from the atmosphere in nodules on their roots. As such they are often a colonising species which germinate quickly after fire to stabilise the soil and to provide nitrogen. This living fertiliser makes the Heart-leaf Flame Pea a beneficial addition to any garden.

Visit Kings Park and Botanic Garden to see this species planted adjacent to John Forrest Memorial and throughout the Western Australian Botanic Garden (refer to map).