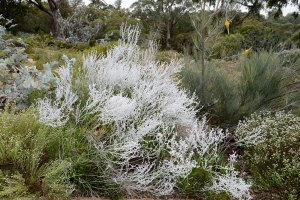 Conospermum – (Greek) conos – a cone, and spermum – seeded, referring to the shape of the nut.

Conospermum wycherleyi is an erect small to medium shrub that occurs naturally in the biodiverse northern sandplains of Western Australia between Perth and Geraldton. It grows to 1.5 metres as a rounded shrub with large soft and decorative white plumed flowers held above the foliage from July to November.

During a 1990s review of the Conospermum genus by the Kings Park botanist, Dr Eleanor Bennett, Conospermum wycherleyi was a newly described species named for Dr Paul Wycherley, in recognition of his contribution to the management and scientific outcomes of Kings Park and Botanic Garden as Director. During his time as Director, he developed the science programs that later placed Kings Park as a research institute of international standing.

This species is not common in cultivation but can often be found at the Friends of Kings Park plant sales.