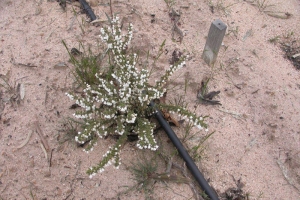 Bancrofts Symonanthus Symonanthus bancroftii may be the ‘rarest plant on earth’, as only one ‘male’ plant and one ‘female’ plant some 500 m away were known to exist in the wild since 1997 – too far apart to allow natural pollination.

Three translocation sites have been established since, to investigate if it is possible to grow this species and produce viable seed. All three tissue cultured clones (father, mother and daughter later raised in Kings Park) were planted on each site, have flowered well and the females have produced viable seed.

This is a difficult species to cultivate and to grow on. Ripping the sites, the use of reticulation and improved horticultural techniques are gradually improving the survival rates. Small quantities of seeds have been collected for several years and seed treatments as well as germination requirements are being investigated on old and new seed, and long term seed burial trials are in progress to investigate seedbank longevity. Seedlings generated from site collected seed have been planted before, producing very poor survival rates. However those planted in 2008 on a deeply ripped site are progressing well and several were flowering within the first season of planting.

Experiments to stimulate germination in situ and natural recruitment have been unsuccessful to date. Fortunately seedlings from harvested seeds are about a 50% mixture of male and females, which will ensure good pollination and seed production in future. Seed is being collected for long term storage at BGPA and Department of Biodiversity, Conservation and Attractions and original tissue cultured clones are in cryostorage at Kings Park to ensure the long term survival of this genetic material. Long term seed burial trials are ongoing and ad-hoc site management and scientific experiments continue.

On-site aerosol smoking trials were initiated in April 2011 and again in April 2013 to try and stimulate the soil seedbank to germinate as no seedling recruits have been found on any of the sites in previous years. Seedling recruitment is completely dependent on sufficient winter rainfall events. Large amounts of seed have been contributed to the soil seedbank and seed treatments to stimulate germination ex situ have been successful.

Past experience with bushland management, other translocations, innovative scientific and experimental horticultural techniques and ongoing adequate funding have been the successful drivers of this project.