This project aims to generate seed sourcing guidelines for priority Banksia woodland species in order to maximise the resilience of ecological restoration for current and future climates. Decisions made by practitioners on the source of seed can have significant impacts on ecological restoration. Seed is expensive and often difficult to source, and inefficiencies due to the use of maladapted seed can result in financial waste and ineffective restoration outcomes. The genetics underpinning seed sourcing is complex and there has been a robust debate on seed sourcing issues, that is currently challenging the established best-practise of 'local is best'. The 'local is best' strategy is largely underpinned by our understanding of the importance of local adaptation in driving spatial genetic structure within plant species, so that non-local genotypes are relatively maladapted - the so called 'home-site advantage' for restoration.

Restoration genetics has its roots in >240 years of genecological research. Genecology is the study of intraspecific genetic variation in relation to source environments. Common garden and reciprocal transplant provenance trials provide our clearest test of the important role of environmental selection in shaping genetic variation within species. Genecological studies enable an evaluation of a large number of seed sources from a wide range of environments in a few trial sites. By relating functional traits to environmental variables such as those associated with climate and soils, adaptive traits can be mapped across the landscape. In a restoration context, these maps can form the basis to delineate seed transfer zones to ensure adapted plant materials.

In 2013, we established a large provenance trial where > 20,000 seeds were sourced from 10 plants from each of 24 sites from across the 400 km north-south range of Banksia menziesii, a common tree of the Banksia woodlands that dominate the Swan Coastal Plain of south-west WA. Viable seeds (14,400 in total) were sown directly into three provenance trial locations within active post-sand-mining restoration sites. Initial seed germination was high (mean = 75%). However, rainfall from October 2013 was 10% of the long-term average. As a consequence, almost all seedlings died. Subsequently, all seedlings were recovered and various above-and below-ground biomass measures estimated.

Seedling growth was assessed against geographic, genetic and climatic distance between trial sites and all other provenances. The climatic range of the B. menziesii distribution is substantial - mean average rainfall across sites ranges from 443 mm in the north, to 831 mm in the south, and average maximum temps are 2oC hotter in the north, for example. The association between climate distance and seedling growth showed a highly significant negative association, such that growth declined with increasing climatic distance away from the Gnangara home site. Strikingly, this occurred for source sites that were both hotter/drier, and wetter/cooler, than the home site. Significantly, not only did we find no evidence to support climate adjusted provenancing, performance of genotypes from hottest/driest provenances was much worse than local genotypes, despite the hot and dry summer.

In 2015, B. menziesii seed from the original 24 source sites were again collected, and a provenance trial established at three sites (Gnangara, Gingin, and Eneabba) as previously. Monitoring in October 2015 has shown good early germination and growth. 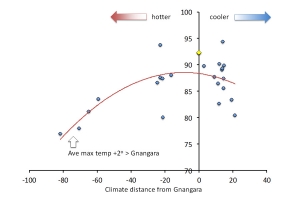