DNA sequencing, microsatellites and Genotyping by Sequencing methods are being applied to resolve biologically significant units at multiple scales in spinifex. Research outcomes will include taxonomic resolution for species complexes in the Pilbara and an understanding of genecologically significant variation within species that will underpin improved ecological restoration outcomes in the Pilbara.

Triodia spinifexes are dominant species over most of arid and semi-arid Australia, where they are key restoration targets for numerous Australian mines post mineral extraction. Despite the critical need for large-scale restoration of Triodia dominated communities, and the tonnes of seed broadcast each year, successful establishment is only intermittently achieved, and usually at lower plant densities than pre-mining. The solutions to improving rehabilitation will involve improved processes at all stages of establishment, from site characterisation and appropriate species selection through seed handling and facilitating germination and emergence, to factors affecting adult survival and reproduction, to achieve long-term population viability. Our research addresses many of these solutions.

We aim to assess the functional diversity in spinifex species, and at different life stages, to better understand the impediments to spinifex re-vegetation in the Pilbara region of Western Australia. The regional emphasis of the project will help place issues of specific development projects in to broader perspective, including Rio Tinto's operations both in Australia and overseas.

Progress to date has identified significant, unexpected levels of genetic diversity within populations, between populations of the same species, as well as previously undetected species. These patterns of diversity provide a better basis for defining seed sourcing provenance zones, in order to maximise survival in restoration, and integration with surrounding undisturbed communities. The observed patterns provide insight into the development of Australia's arid zone, and concurrent evolution of arid-zone organisms.

We have also found evidence of differing preference for specific surface geology in some spinifex species, which appears to influence their current distributions. These processes have significant implications for targeted restoration, matching specific species to substrates.

Ben Anderson (PhD; 2013 - 2016) Diversity in spinifex and its implications for the evolution of the Australian arid zone biota. 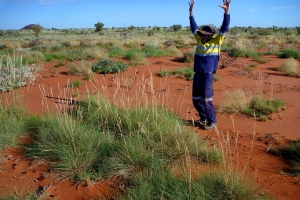