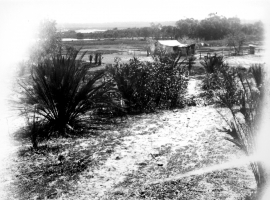 Bold Park has an interesting documented cultural history. There are a number of sites in the Park that are considered historically significant to Western Australians.

Camel Lake owes its name to the fact that camels were quarantined at this site during the years of the gold-rush when they were imported for use on the goldfields. Distinct circular marks of tethering are evident on some of the trees. Ernest Giles rested and watered his camels here after his epic journey from Port Augusta to Perth in May 1875.

As Perth developed, Aboriginal people who inhabited the area were forced to find new campsites, one of which was at the south-east corner of Bold Park. A fig tree planted here remains as a symbol of those times.