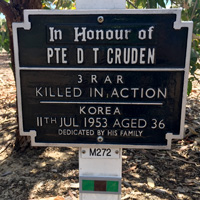 He was a merchant seaman for most of his life before emigrating to Australia to work in the mines at Kalgoorlie. We have not been able to access his military record to ascertain when and where he enlisted.

Have your say on Kings Park transport networks

Walking, cycling, driving, even unicycling - what could transport networks to and within Kings Park look like between now and 2050?

Kings Park and Botanic Garden (Kaarta Koomba) is a place of great significance to the Whadjuk Noongar people, with a rich cultural and spiritual heritage.