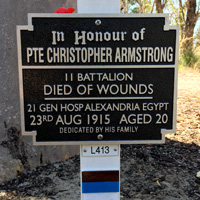 Private Christopher Armstrong of 11 Battalion, the son of James and Eliza Armstrong, was born in February 1895 at Springfield Farm Yallingup. He had two brothers and two sisters.

His great grandfather, who was a captain in the Gordon Highlanders, migrated to Western Australia in 1829 and was one of the first settlers in the state.

Christopher's mother died during the birth of his sister, Elizabeth and he was raised by his aunt and the Keenan family.

He attended school at Yallingup and after finishing his studies took up farming. His sporting activities included rifle shooting and he was a good shot.

Christopher enlisted in May 1915 at Busselton and commenced training at Blackboy Hill Military Camp, where he was posted to 7 Reinforcement of 11 Battalion.

This battalion was recruited in Western Australia and in June they sailed from Fremantle on HMAT Karoola bound for Alexandria. Then in early August he sailed on HMAT Berrima for the Dardanelles and was soon in action.

He was wounded in action and taken on board HMHS Sicilia and subsequently transferred to Alexandria.

He was 20 years of age and he is buried at Chatby Military and War Cemetery Alexandria.

His plaque is placed alongside that of a family relative, Lieutenant George Horwood Fauckner, who was killed in action in Crete in May 1941.

Did you enter our fabulous Flowers in Focus competition last year? Well it's back, bigger than ever in 2020 and we’re excited to see your magical Western Australian wildflower photos!