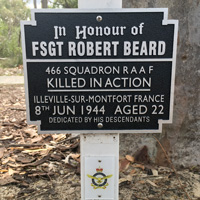 Flight Sergeant Robert Beard was the son of Francis and Ethel Beard and he had two brothers and two sisters.

He was born in Toodyay in July 1921 and later attended Duke Street school at Toodyay.

Robert enlisted at Como in February 1941 but, as his service record is not available, it is not known where he trained or when he went to England.

He was posted to 466 Squadron based at Driffield. This squadron was formed in the United Kingdom in October 1942.

In March 1944, he married an RAF driver, Monica McLoughlin, at Litchfield. In August 1946, Monica arrived in Melbourne on board SS Athlone Castle with their baby son, Keith, one of 300 war brides from England.

Robert was the rear gunner in Halifax MZ283 and was one five Australians in the crew of six.

They took off from Driffield on the night of 7-8 June to bomb the railway junction at Juvisy, France. Fourteen aircraft took part in the raid and only MZ283 failed to return.

Flight Sergeant Robert Beard, service number 29888 of 466 Squadron was killed in action on 8 June 1944 when the plane crashed at Illeville-sur-Montfort, France. He was 22 years of age.

The remains of all the crew are interred in the churchyard of that commune.

Sections of the Western Australian Botanic Garden near Lovekin Drive and Forrest Drive will be closed from Monday 2 November to Friday 13 November 2020 due to essential tree works.

Connecting community, conserving flora and conserving identity is the theme of the Botanic Gardens and Parks Authority’s 2019-20 annual report which is now available online.