Perched high on the Mt Eliza scarp in the heart of Kings Park, the Western Australian Botanic Garden is a sweeping 17 hectares of stunning garden displays, featuring striking species from around the state. 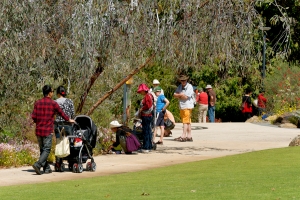 Since its opening in 1965, the focus of its collections has been the cultivation and display of Western Australian flora, now displaying around 3,000 of WA's 12,000 species of native flora.

Offering beautiful river and city views, the WA Botanic Garden has the largest display of Western Australian flora in the world, many of which occur naturally nowhere else on earth.

Plantings are grouped by regions of the state or notable taxonomic groups, and some are purely for spectacular display. A key feature is the Conservation Garden, which displays the state's most critically endangered and rare species.

Regional displays include flora from the Wheatbelt, Goldfields, Stirling Ranges, Rottnest and Garden islands, the Kimberley, Mulga, Southern Coastal and many more, with other beds dedicated to key native genera such as Verticordia, Boronia, Grevillea and Hakea, Waxes and Kangaroo Paws and Eucalyptus.

There are always plants in flower in the gardens but the pinnacle of displays occurs in late winter and spring, when expanses of annual wildflowers are a well-known highlight.

Unlike many botanic gardens, it is free to enter and is open 24 hours a day. The WA Botanic Garden is a popular venue for family picnics, live music, education programs and the Kings Park Festival which attracts more than half a million visitors each September.

In 2016, artists Paul Johnson and Gail Mason were commissioned to create a stunning new entry sculpture, 'Symbiotica', for the Western Australian Botanic Garden.

Stretching eight metres high with arching aluminium panels and featuring copper and dichroic glass highlights, 'Symbiotica' is beautifully offset by mature plantings of the weeping Silver Princess (Eucalyptus caesia). 'Symbiotica's' design was inspired by the relationships between plants and insects - the large aluminium panels may be interpreted as leaf blades, or alternatively as insect wings.

Intricate seed patterns from 11 endemic WA plant species have been laser cut into the aluminium panels. Changing colours highlight the sculpture as light reflects on the dichroic glass elements, suggesting both shimmering insect wings and the colours in wildflowers.

The sculpture was officially unveiled on 1 September 2016. It was part of a signature project to commemorate the 50th anniversary of the Botanic Garden in 2015, generously funded by the Friends of Kings Park and Lotterywest.

In early 2017, the Western Australian Botanic Garden was prominently designated with its name in 600 mm high, brushed aluminium letters mounted on a low granite plinth, completing the final element of a grand entry. At last, after more than 50 years, this significant living museum of plants has an official welcoming point for visitors.

History of the Botanic Garden

Officially opened on 4 October 1965, the focus of the WA Botanic Garden has always been on the cultivation and display of Western Australian flora, most of which had not been cultivated at that time.

Now, more than fifty years later, the WA Botanic Garden is an ever-changing, living research centre that focuses on the conservation of Western Australia's flora and displays some of the state's most diverse and spectacular plant groups. Additional species continue to be collected from the wild for research trials and propagation in the Kings Park nursery, ever increasing the range of species in cultivation.

Thanks to the vision and dedication of Kings Park's staff over the years, Kings Park and Botanic Garden has become a leader in environmental conservation, horticulture and scientific research, which has achieved international recognition.