Ricinocarpos brevis was only discovered in 1981 near Windarling Peak and following this initial chance discovery and through additional extensive searches of the surrounding region only two more populations were found with a combined total of 18,000 plants. The largest population occurs in the Windarling Range which is currently mined for iron ore. As part of an integrated conservation project for this species a five-year research program was established in early 2013 to understand the ecology of this species with the overall aim to use this knowledge to replace plants that have been lost due to mining.

The main focus of this project is on understanding the seed biology and ecology of this species, as well as researching effective ways to propagate large numbers of plants through vegetative means (cuttings and tissue culture) to supply sufficient plants for in situ reintroduction programs in future. Initial investigations have focussed on understanding the soil environment where R. brevis is naturally found and to use this information to compare and contrast these natural sites to other locations to determine their suitability as potential translocation sites.

In addition, other parts of the research program have involved identifying the key insect pollinators and seed dispersers of R. brevis to determine their role is in the dispersal of pollen and seed in the population. This will provide a baseline to which reintroduced populations of R. brevis can be monitored and assessed, to determine if ecological processes, such as pollination, have been successfully established.

Outcomes so far have established that R. brevis:

The results from the seed biology investigations are now being used to develop and trial more insightful and effective ways of re-establishing R. brevis plants under restoration conditions.

Turner S, Elliott CP (2018) To the rescue – science and industry come together to save the critically endangered Banded Ironstone wedding bush (Ricinocarpos brevis). For People and Plants 102: 27-30. 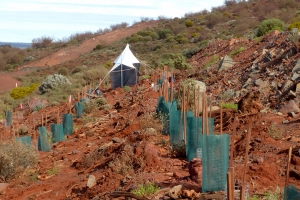 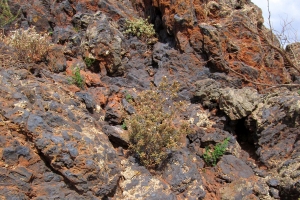