This 'one year' pilot project including propagation, translocation requirements and population genetics was managed and monitored for six years. Only one site was used and planted in 2003. The project has performed well beyond our expectations, considering the poor growing conditions on a pre-mined extremely wet and sandy site over a solid ironstone base, which is exposed to strong winds. All of the four rare ironstone species are flowering as well as producing viable seed resulting in seedling recruitment of all species. Grevillea brachystylis subsp. australis has been recruiting seedlings in large numbers via seed generated from the translocated plants since 2004.

For this project we used good quality, pathogen-free topsoil placed over the top of solid ironstone. All the rehabilitated area on the mine site was direct seeded with a wide range of indigenous species. Combined with the seed bank, this quality topsoil has resulted in 50% more species recorded on site, compared to the surrounding poorer quality soils. Unfortunately the root pathogens Phytophthora and a Pythium species have been isolated from the site, probably due to free water flowing onto the site. The problem was addressed by spraying with half strength phosphoric acid twice a year, which appears to be controlling these diseases.

The last monitoring results indicated all species were still present in high numbers, contributing seed to the soil seedbank. A site visit in November 2012 indicated there were few weeds on site. Natural recruits of all species were increasing, especially Grevilleas. More than double the original number of plants were found on site, and many of the original plantings were still surviving. Other indigenous species germinating from the soil seedbank (natural and sown) have enriched the species diversity.

Past experience with bushland management, environmental weed control and other translocations, innovative scientific and experimental horticultural techniques have been the successful drivers of this project. 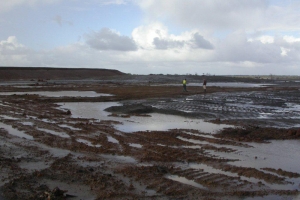