Saw Avenue was opened in 1902. Along with the more recent developments, the Saw Avenue precinct has seen many changes over the last century.

View image slideshow The Saw Avenue road alignment once formed part of the original 1870's bridle trail that led from Subiaco to the Crawley Baths; a public watering hole where generations of Western Australians learnt to swim.

In 1974, the area became the home of the Ernst Wittwer Playground built by Kings Park Horticulturist and Superintendent, Ernst Wittwer. Thanks to the generous support of Variety the Children's Charity of WA, the precinct was refurbished in 2009 with modern community facilities and an innovative nature based play area was designed by local woodcarving artist, Nic Compton, with the unique collection of picnic furniture and play elements created from recycled timber from within the park. In recognition of Variety WA's contribution to the project, a former amenities block was converted to the Variety Pavilion.

The Saw Avenue area has also been resident to the infamous Jarrah Log since 1978. Originally brought to Kings Park from Dwellingup, the log pays tribute to the significant role that jarrah played in the early colony's economy. The iconic log has now been relocated into the adventure play area, for future generations to enjoy.

New picnic and adventure play elements were added to the area in August 2014, thanks to Variety WA – the Children’s Charity. The expanded design includes a fort, climbing net, bridges, tunnels and climbing logs, as well as new barbeques and picnic tables. The area is well-equipped for all visitors; however it has been developed with the particular needs of children with disabilities in mind.

The Saw Avenue Amphitheatre is also located here and is a home for children's theatre during the summer events season.

The Variety Pavilion, Saw Avenue Lawn and Amphitheatre are popular venues for functions and family gatherings. 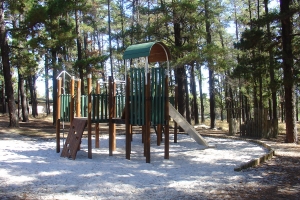