Bold Park is the largest remaining bushland remnant in the urban area of the Swan Coastal Plain. The tuart-banksia woodlands and limestone heaths support a number of habitats for wildlife.

Bold Park has a diverse range of plant communities, including coastal heaths not well represented elsewhere. Tuart-banksia woodlands occupy most of the bushland. Seventeen plant species have been identified as regionally significant by the Department of Environment and Conservation because they are poorly represented populations or at the northern or southern extent of their range. Park borders were selected to incorporate a stand of Fremantle Mallee (Eucalyptus foecunda) which is poorly represented in the metropolitan area. Bold Park is also home to a relatively rare variant of Geraldton Wax (Chamelaucium uncinatum) - dubbed 'Wembley Wax'.

A small number of western grey kangaroos (Macropus fuliginosus) lived in the park up until 1986, when they were probably killed by dogs or vehicles.

Introduced mammal species found in the park include cats, rabbits, foxes, house mice and the black rat. Horses and domestic dogs, though not resident, are regularly exercised.

There are 28 reptile species in Bold Park. The bushland is unique in that it has all five species of burrowing snake known on the Swan Coastal Plain, one being the rare and endangered black striped snake (Vermicella colonotus).

Bold Park has a rich avifauna with 91 bird species recorded, including vagrants, migrants and nomadic species that are likely to occur sporadically. You may be interested in downloading the Bold Park birds brochure, available for download or at the Western Australian Ecology Centre.

There are three specific groups of birds which warrant special interest:

The second group of birds in the area of special interest are honeyeaters, which are so numerous in parts of Bold Park that the area has been known as 'Honeyeater Hill'.

There are high number of bird-of-prey species, including the Peregrine Falcon (Falco peregrinus) which is relatively rare and classified as in need of special protection. The relatively large size of Bold Park bushland is particularly important for these birds because they feed over large territories.

Over 300 invertebrate fauna have been recorded in Bold Park, including 47 ant species and 11 butterfly species.

Since the Botanic Gardens and Parks Authority began management of Bold Park in 1998, fungi surveys have led to the identification of 479 presumed species of macrofungi (including species not yet formally named). More new species are likely to be recorded in future years, with a high proportion of previously undocumented fungi being recorded each year. Almost all of the species are considered to be indigenous to the area. 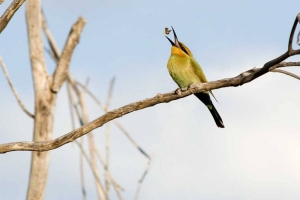