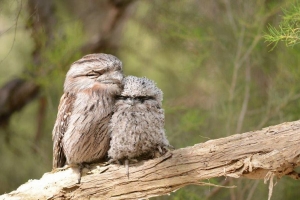 Kings Park bushland provides a corridor benefit to local birds and invertebrates, allowing the continuation of species migration through the urban environment.

There are over seventy bird species, twenty reptile species and hundreds of different invertebrates in Kings Park bushland. The 'Birds in Kings Park' guide identifies some of the more common species likely to be encountered in Kings Park and Botanic Garden and is available for download via the brochures section.

The Brushtail Possum (Trichosurus vulpecula), Quenda (Isoodon obesulus) and a number of bat species represent the native mammals of the Park. Kings Park supports a rare population and habitat of native snail, Bothriembryon indutus (Scarp Snail). Usually the species occurs along the Darling Range, which has a granite and lateritic environment. The disjunct population in Kings Park bushland exists on limestone cliffs.

The trapdoor spider, Aganippe rhaphiduca, although not rare, has 'localised' population differences in Kings Park. Usually it occurs on the Darling Scarp and in Jarrah forest to Albany.